Is an African passport the right solution to SA’s immigration problems?

You are here: Home / News / News / Is an African passport the right solution to SA’s immigration problems... 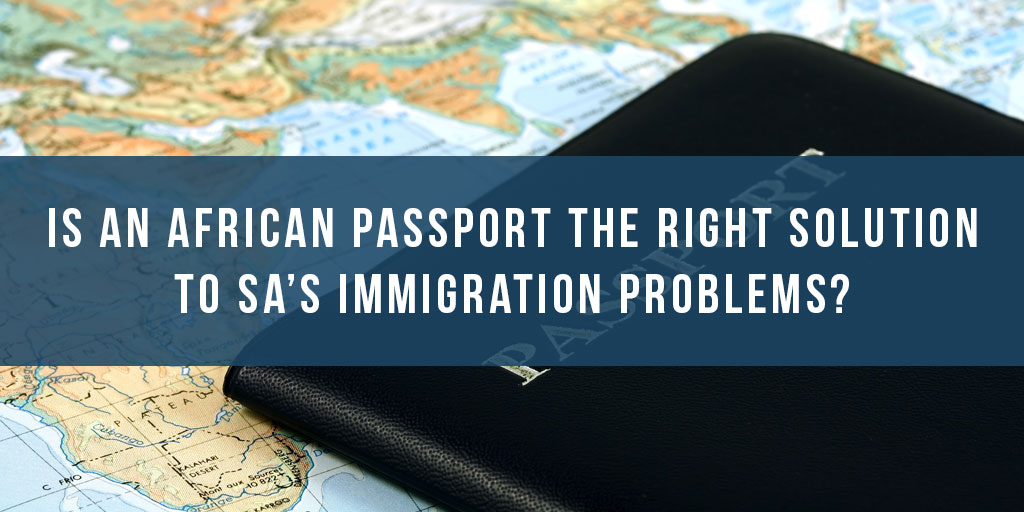 If home affairs comes knocking will your workforce be compliant?

Organisations who employ foreign nationals are obliged to do so in accordance with the requirements of the Immigration Act 13 of 2002, as amended. Under these regulations, they may not take on an immigrant who does not have a legal visa, whose visa does not allow them to work for that employer, or who would be employed in a role other than that stipulated in their visa.

The home affairs department has warned that it has begun enforcing the law by conducting regular audits on employers to ensure that they comply with the regulations. This puts the onus on companies and organisations to ensure all their expatriate employees are correctly documented before they begin work.

According to one source, South Africa – about six times larger than the United Kingdom – has only 600 inspectors to service the entire country. Yet, about 3000 British inspectors cover the London area alone. Comparing the numbers, this makes the interception of illegal immigrants at border posts, the monitoring of foreigners within the country – legal or not – and the tracking of those who are undocumented or have overstayed their welcome a real and notable challenge for the department.

Agreeably, the home affairs department should make provision for any permit application that is being made, however it is evident that the high volumes are becoming strenuous for the department. By considering this and that the home affairs department is poorly funded by the government, grossly understaffed and the large influx of applications they receive on a daily basis, this enforcement is perhaps an attempt to improve the current immigration system and identify possible areas of improvement.

Is there a better way?

In contrast, many representatives of the African Union, of which South Africa is a member, are calling for an African passport that will facilitate freedom of movement across the continent. Such a system would certainly do away with the high cost and manhours needed to legislate and control the situation, but is it the right solution for South Africa?

One could look to the European Union whose members, in an effort to promote free trade, have allowed their people to move easily from one member country to the next. However, this freedom has an unwelcome side effect because it makes it easier for terrorists to find their way to target countries from those states with poor entry control. We see the tragic results regularly in news reports. Thankfully, South Africans have yet to experience a foreign terrorist attack on their soil. However, lacking our resources, this may be attributed in some degree to our conservative outlook on immigration.

This is not to say that we should take a Trump-like view of immigration or rule out the possibility of opening our borders one day.

The government and business certainly welcome expatriates who enter the country legally and bring with them the critical skills so urgently needed to be competitive in the global market. But today is not the right day, not for our society, our economy nor our national security.

Until then, the law remains and every organisation is obliged to ensure its foreign workers are employed legally and in compliance with the conditions of their visas.

Government and business alike certainly welcome foreigners who enter the country legally and bring with them the critical skills so urgently needed to be competitive in the global market.

Considering the above, it is important that employers make provisions and ensure that they are adhering to the law, advisably by keeping a copy of the Act at hand.

Will the home affairs department be able to check on every business to ensure they adhere to the law? Perhaps not, but with the consequence of a stiff fine or up to one year of imprisonment hanging over the heads of each company leader, HR manager or person responsible for employing the illegal foreigner, few will take the chance of a random inspection arriving at their door. Even for those who employ foreign nationals at much lower rates than local workers regardless of their visa status, the risk is not worth it.

This is compounded by the fact that the department has laid out definite plans to upgrade its systems and services following the implementation of the white paper on international migration, which is said to be concluded imminently, the department envisages to become completely digital by 2020. Organisations should start working towards complete compliance as soon as possible.

As a first step, employers are advised to carry out a comprehensive audit of all their foreign national employees, bearing in mind that the law will assume they knew of any irregularities at the time of hiring and will be held accountable accordingly.

There are a number of expatriate services agencies in South Africa who offer visa checks and assistance with the necessary applications and corrections where required and can certainly make the process less burdensome. It also adds weight to an organisation’s case that they engaged an impartial third party, especially when an undocumented employee is discovered in theirs ranks.

Is an African passport the right solution to SA’s immigration problems?

SA looking at ways to simplify travelling with minors: Gigaba