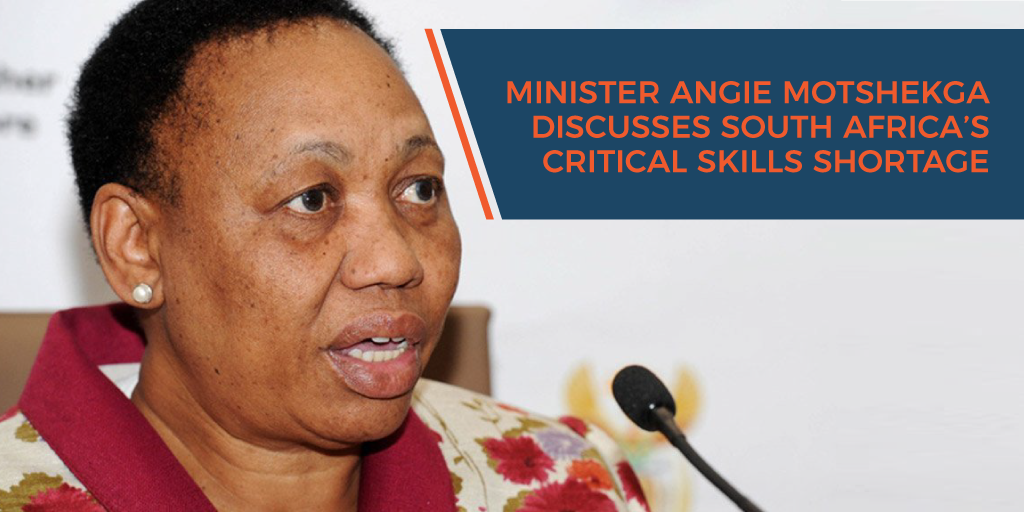 “Expat and international mobility group Xpatweb has recently published the results of its critical skills survey, which lists the types of skills and sectors which companies have identified as being the most lacking in South Africa. These ‘most needed’ skills were identified as follows: Engineers, ICT specialists and specialised technical skills.”

Keynote address by the Minister of Basic Education, Angie Motshekga, at the official opening of the Rhodesfield Engineering School of Specialisation, Ekurhuleni

The school is strategically located in the aerotropolis of Ekurhuleni which has the layout, infrastructure, and economy is centred on an international airport. It has been recognised by the international aviation community that there will be an anticipated shortage of skilled aviation professionals in the near future. According to aviation experts, the aviation industry is one of the fastest growing industries in the world. It has been reported that by 2030 air traffic volume would increase by 50%.

Airlines and the entire aerospace industry are dependent on a pipeline of young, appropriately educated talent who they can prepare, with bridging training, for careers in the sector. The Airlines Association of Southern Africa (AASA) warned in 2017 of a calamitous future if the skills pipeline is not strong enough. The Airlines Association of Southern Africa says it needs around 60,000 new pilots, technicians and engineers. Globally, some 480 000 additional technicians will be needed to maintain the growing aircraft fleet, by 2026. Over 350 000 pilots will also be needed to fly them.

Success in the school subjects of languages, mathematics and science, forms the basis for participation and success in technical subjects in post-school education and training institutions as well as the workplace. Presently, each year around 140 000 grade 12 students complete the matriculation examination with a bachelor’s pass, and of these only around 50 000 students pass mathematics with a score higher than 50%.

The pool of students who can potentially access university and science based TVET programmes is very small in comparison to the skill demands in the country. Hence the need for Schools of Specialisation such as this one is indeed a catalyst for the future of basic education.

Programme Director; the issue of skills shortages have been an issue for South Africa for some time now and this is further compounded by the growing need for technical and digital skills.

These skills of the future have the potential to transform lives and drive economies. However, in many countries, (South Africa included) imbalances between supply and demand for skills lead to significant skills mismatches and shortages. It is time for South Africa to get skills mix right! I am glad that the Gauteng Education Department is a pioneer in this regard.

The Schools of Specialisation (SoS) are part of the Gauteng’s Education Department’s Reorganisation of Schools Programme which takes its lead from the National Development Plan (NDP). According to the NDP for the country to stop poverty, reduce inequality and ensure that all citizens have better working and living conditions by 2030, South Africa needs to produce over 30 000 qualified artisans a year to meet the labour demand.

As we are aware, the SoS will focus on maths, science, engineering, commerce, entrepreneurship, sports, arts and culture. This is in line with the NDP injunction that we must meet a target of 450 000 learners being eligible for a Bachelors programme with Maths and Science every year till 2030. We hope that by honing skills in these areas, it will be able to transform schools in Gauteng and help grow the skills base needed for economic growth in the country at large.

Programme Director, I am certain that this ground-breaking initiative will grow the skills base of our learners beyond Gauteng. Various studies have agreed that as a country we need to focus on technical and vocational training needs.

According to the Centre for Development and Enterprise, South Africa has both a chronic shortage of mid-level technical skills and a crisis of youth unemployment, which is demonstrated by the not-in-education, employment or training (Neets) phenomenon. We have 3.4-million Neets in the age group 15-24, compared to a total of about 1.6-million in universities and colleges. To tackle the growth constraints exemplified by this shocking figure, the country needs an accessible and quality educational alternative to degree or diploma studies. Hence the Schools of Specialisation focusing on technical skills especially in engineering are a welcome arsenal in this regard.

There is no doubt that South Africa needs educated, qualified and experience people with the right skills to assist in growing the economy. According to Skills-Universe currently there are in excess of 500 000 positions vacant in South Africa that requires people with technical and vocation skills. Sadly, South Africa has 1 engineer for every 3200 people compared to 1 for every 130 in china, 250 in Europe and 450 in Australia. Government’s own Statistics show that there is a dire shortage of scarce and critical skills.  A National Scarce Skills List of the top hundred scarce skills is regularly drawn up by the Department of Higher Education and Training. Various sources of information are combined, such as government job creation plans, like the National Development Plan, the National Infrastructure Plan, Industrial Policy Action Plan, and the Sector Education and Training Authorities (SETAs) Scarce Skills Lists, which indicates shortages in specific career fields.

According to the Department of Labour, too few people study qualifications that are required to address the skills shortages in the country. I am glad to announce that according to the latest figures the following skills are considered critical and scarce. These are Engineering Professionals including Electrical Engineer, Civil Engineer, Mechanical Engineer, Industrial and Production Engineer.

Also included in the list are Chemical Engineer, Energy Engineer, Materials Engineer, Metallurgical Engineer, Ship Engineer, Telecommunications Engineer, and Environmental Engineer. We also urgently need skills in Computer Network and Systems Engineer amongst others. The good thing is that we also have shortages of teachers who can teach these subjects. So this means, some graduates here can still pursue a teaching qualification in these critical and scarce skills.

To drive the point of home, the Expat and international mobility group Xpatweb has recently published the results of its critical skills survey, which lists the types of skills and sectors which companies have identified as being the most lacking in South Africa. These ‘most needed’ skills were identified as follows: Engineers, ICT specialists and specialised technical skills.

As a result most companies are looking abroad to fill the gaps. According to Xpatweb’s survey most companies (75%) admit that they actively seek international talent to fill their skills needs, even despite viewing the visa processes needed as prohibitive.

Programme Director; this year is special in South Africa as we mark the centenary of the late former President Nelson Mandela, affectionately known as Madiba.  President Mandela is the founding President of the modern day South Africa founded on the values of freedom, peace, justice and equality.

Lest we forget till he took his last breathe on that fateful day on the 5th December 2013 at 20h50, Madiba was a member and leader of the African National Congress (ANC). He dedicated his life to the struggle for the liberation of his people and the people of the world.

Madiba’s humility, compassion, and humanity earned him the love and respect of the people of South Africa, Africa and the World. Madiba’s abiding vision was for a society where no person was exploited, oppressed or despised by another. Madiba’s life was dedicated to the building of a united, democratic, non-racial, non-sexist, democratic and prosperous South Africa and a just world order.

Programme Director, we are also celebrating the 28th anniversary since Madiba’s release from 27 years of incarceration by the apartheid regime. Sadly, it is five years since Madiba departed this earth to join as he always quipped, “the nearest ANC branch in heaven”.

More than anything Madiba loved children and valued education. It is therefore a fitting tribute that today we officially open a state-of-the-art facility here in Ekurhuleni. Madiba put it succinctly in his world acclaimed autobiography, Long Walk to Freedom when he wrote:

“Education is the great engine of personal development. It is through education that the daughter of a peasant can become a doctor,

It is what we make out of what we have, not what we are given, that separates one person from another.”

Today’s official opening occurs when the new South Africa has come of age as we have already celebrated our 24st anniversary of the 1994 Democratic Breakthrough. Programme Director, indeed South Africa is a better place today than it was 24 years ago. We are indeed celebrating peace, non-racialism, non-sexism, democracy and prosperity.

In the son of Mvezo, uTata uMadiba, we have our nearest and brightest star to guide us on our way. We will not get lost.

To President Nelson Mandela, today we pledge that as public representatives we shall continue to serve with honour and dignity. We shall spare neither strength nor courage in serving your people. We will not dare allow your people to languish in poverty, deprivation, discrimination and suffering of any sort.

In conclusion, 2018 also marks the centenary of another giant of our anti-apartheid struggle, Mama Albertina Nontsikelelo Sisulu. Through her remarkable life and outstanding contribution, she defined what it means to be a freedom fighter, a leader and a diligent and disciplined servant of the people. Through her leadership, she embodied the fundamental link between national liberation and gender emancipation. As we mark her centenary, we reaffirm that no liberation can be complete and no nation can be free until its women are free. Ntate Lesufi, I hope more girl children will be produced in this school in the honour of MaSisulu.