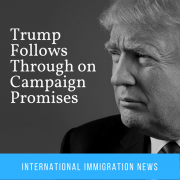 TRUMP FOLLOWS THROUGH ON CAMPAIGN PLEDGES

On Wednesday, 25 January 2017, The US President, Donald Trump took his first step to enact his pledge(s) by signing the executive orders to ‘Build a Wall’ on the Mexican border and to prevent sanctuary cities from offering protection to undocumented immigrants.

This wall will be built on the border between the United States and Mexico – the border is stretched by 2 000 miles (3 200 kilometres).

President Trump claims: “a nation without borders is not a nation”, by signing this order, he believes that the United States of America gets back their borders.