In September last year, then Minister of the Department of Home Affairs, Malusi Gigaba announced that a new critical skills list is expected to be released in April 2019.

The industry is in turmoil as business and providers scramble to submit visa applications prior to the list being published and certain categories removed.

Marisa Jacobs, Director and Immigration Specialist at Xpatweb says “There is no need to panic yet!”

No need to panic

The Department of Home Affairs confirms the critical skills list will first be published in draft format and distributed for public consultation prior to finalising and legislating the new list.

The draftlist is expected to be signed off by the Minister and distributed in April 2019.

Cooperation with Business to ensure a comprehensive the new list

On the one hand there is no list which will always be absolutely complete and comprehensive, in a specific place and time.

The requirements always evolve with time. Such as with the new oil and gas opportunities, we know there will be expansion in this area on the critical skills list.

“We have never failed to obtain a work permit for a foreigner where we can show that a local job is not taken and there is valid commercial rationale.” -Says Jacobs

The critical skills list is but one of various categories of obtaining a work visa.

The new list is much shorter than the current list, probably as Home Affairs saw many of the old categories not being used.

A positive development is that the draft version of the new list is more concentrated, by adding certain categories together.

The removal of the Corporate General Manager category has received much attention.

“We believe this category has been largely abused by many given rise to the proposed removal thereof.”

In its current form it is in need of a revamp.

“We agree that this category will or should not be removed in its entirety and the consultative process will provide the input required for the Department of Home Affairs to more directly and suitably define this skill and the form it should take on this list to curb abuse.” Says Jacobs

Where anyone foresee a category not catered for, they are most welcome to email Marisa Jacobs on marisa@xpatweb.com with motivation and we will ensure that Home Affairs is made aware hereof before the list is finalized.

Also, where a category is not added under critical skills list, there are other categories under which a valid work permit can always be obtained. 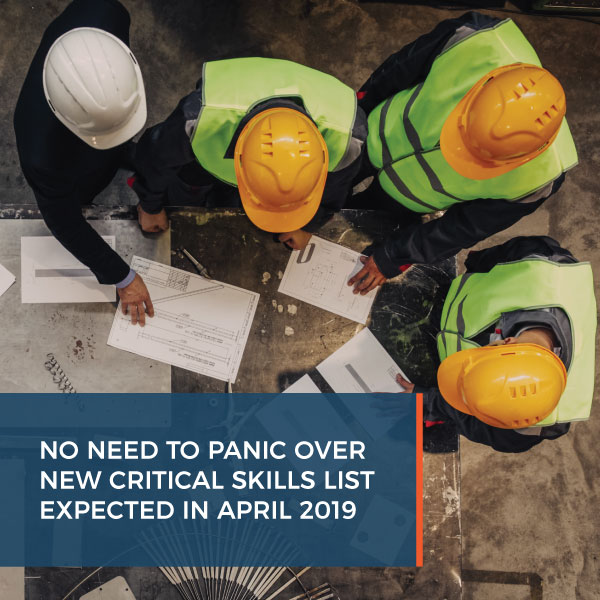 FOR MORE INFORMATION, PLEASE SEND US A MESSAGE:

NEWS | ATTRACTING SKILLED IMMIGRANTS TO SOUTH AFRICA IS KEY TO GROWTH
Scroll to top
Visit the Government Portal for the latest updates on COVID-19.
+